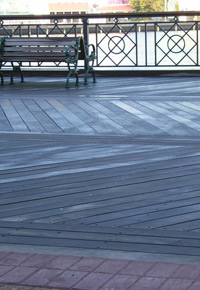 Can thinner Ipe lumber be used instead of 2x thickness?

As the East Coast is being rebuilt after the widespread damage from Hurricane Sandy, many local governments are debating about the best materials for rebuilding boardwalks. While some are considering composite decking products, others are automatically assuming that 2×4 or 2×6 sized decking is the best option for high-traffic boardwalks. For pressure-treated lumber, sizes of 2×4 or 2×6 are understandably the norm. However, when you’re looking at a premium decking species such as Ipe, such 2x sizing is unnecessary; instead of providing reasonably strong surfaces, the kind of overbuilding we see with 2x Ipe decks accomplishes little more than extra expenditures, longer lead times, and supply chain concerns.

The thickness required to make a deck or boardwalk stand up to the test of time and traffic is largely dependent on the material’s stiffness. Stiffness, along with expected load, determines the amount of space that can be allowed between structural members. The Modulus of Elasticity, or the design value E, takes the form of a ratio that describes the amount of deflection or “bounce,” the material will endure, based on the expected applied load. Of course, any material will break with too high of a load, and public boardwalks certainly need to be built with this issue in view.

This comparative deflection is more than just a numbers game: It has been backed up by structural engineers. Of course, the harder the wood, the less able to resist deflection without cracking, but Ipe has proven to be able to avoid such issues, as well.

In the end, the numbers cited above become a moot point. Regardless of the “bounce” factor and relatively thin Ipe’s ability to withstand the wear-and-tear that comes from heavy foot traffic, we at J. Gibson McIlvain fully realize and appreciate the fact that builders naturally resist deviating from current specifications, particularly when facing high-profile projects like public boardwalks. Even the hard data is not enough to convince many not to overbuild, and we would never officially recommend going against the grain, for the same reason builders would hesitate. We understand the need to make safe recommendations. Really, we do. At the same time, we also see some potential problems that neither builders nor their customers realize.

If we were talking about the normal amount of boardwalks built in a year, then there really wouldn’t be many issues aside from individual municipalities’ overpaying for overbuilt boardwalks. But, as we’ll see in Part 2, supply chain problems are a definite concern in the wake of Hurricane Sandy.

We have provided fine lumber for notable projects throughout the world, including the Smithsonian museums, Supreme Court building, the White House, Capitol building, and celebrity homes nationwide. END_OF_DOCUMENT_TOKEN_TO_BE_REPLACED