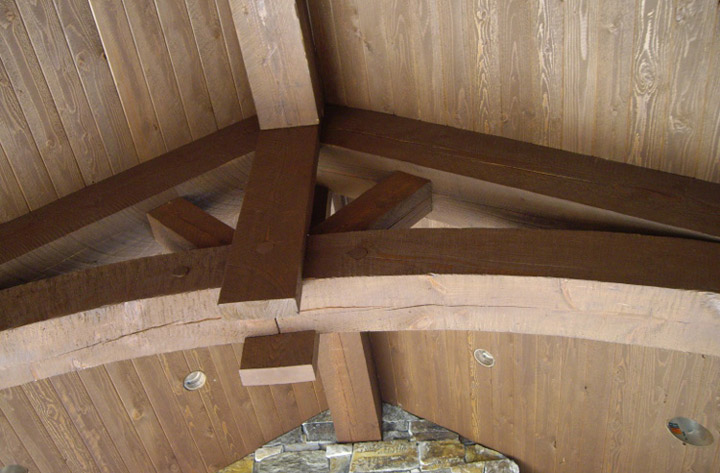 In Part 1 we looked at what causes checking in large timbers and how it varies based on species. Regardless of whether checking appears as multiple, smaller surface-deep checks or a single large crack, the important part is that they do not decrease the structural integrity of the timber. In fact, the checks often serve to create stronger structures, since they allow for release of the tension that inevitably builds up inside.

The main reason some builders or customers wish to eliminate checks is simply aesthetic. One way to accommodate that preference is by beating the wood to it and providing intentional, well-placed saw kerfs. Is that really the best idea? Let’s explore the issue together.

Since wood moves in the same predictable ways that it has throughout history, we shouldn’t be surprised that the saw kerf technique is ancient. Dating back to the Japanese Temple carpenters in 600 BC, the same approach is used by some builders today.

The main problem associated with kerfing is that the process is generally completed before the drying process begins. Especially when it comes to exotic species, most lumber suppliers don’t have access to the lumber before it begins to dry. When we’re dealing with large timbers, they’ve often been either kiln dried or air dried for an extended period of time.

At J. Gibson McIlvain Lumber, we seal the ends of timbers before storing them in the shade, in order to prevent as much checking as possible. However, that does not eliminate it all.

Often, checking doesn’t occur until after installation. Timbers installed in a home or on a deck, especially when exposed to direct sunlight during hot summer months, can exhibit dramatic checking. Sometimes people can actually hear popping sounds of the post while sitting on their decks. Timber frame home owners sometimes report hearing loud cracking sounds several years after moving in.

Of course, that scenario puts builders at a disadvantage, since they can’t help how the wood behaves once they’ve completed the job. The best they can do is to educate their customers about wood movement, assuring them that checking is expected but in no way indicates lack of structural integrity.

Timbers will never stop moving; in fact, you can expect the checks to open and close as moisture levels shift and the outer layers absorb and shed moisture. Because of that continual process, checks should not be filled in any way. Instead, it needs to be embraced as part of the character of natural products, adding unique beauty to your deck or home.

When we stop trying to fight nature’s means of preserving itself and, instead, admire its resilience, maybe we can even learn a thing or two about how to respond to the pressures and inevitable changes in our own lives.

We have provided fine lumber for notable projects throughout the world, including the Smithsonian museums, Supreme Court building, the White House, Capitol building, and celebrity homes nationwide. END_OF_DOCUMENT_TOKEN_TO_BE_REPLACED